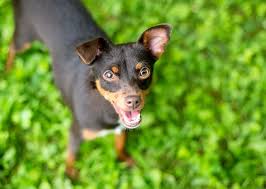 Zack the Chipin woke his owner one night with his barking when a man in the neighborhood had been stabbed. After this, the guard dog habits in the Chipin became more prominent.

Chipins can be lively, loving companions or alert watch dogs. They inherit a charming sassiness from the Chihuahua and a fun-loving feistiness from the Min Pin. Small and low maintenance, they make ideal indoor dogs for small living spaces. If you are considering a pet for your family and you have young, rambunctious children, consider other breeds. Also, if you have other pets, socialize them when your Chipin is a puppy for the most harmonious results.

Chipins are very intelligent animals and are easy to train. They aren’t usually aggressive, but they are excitable and need plenty of daily exercise to release pent-up energy. Chipins are highly social dogs, and while they do well in single-pet households they will need plenty of attention from their owners.

The Chihuahua’s history is controversial because there are so many different stories about their background. The most common belief is that they originated over 3,000 years ago, with the Aztecs. Another story is that the breed was started in China and was mixed with other small native dogs when they were brought to the New World by Spanish traders. Another theory is that the Chihuahua started in South America from the Techichi breed of dog, which was a tiny, mute dog used in sacrificial ceremonies. Some believed that the small dogs should be buried with their dead as guides to the afterlife and others believe the dog was used for food by the Aztecs and Toltecs. Another idea is that the Chihuahua was found in Chihuahua, Mexico in the 1800s, which is where the breed got its name. The Chihuahua was not popular in America until Xavier Cugat brought his Chihuahua to appear with him in public. They have been registered with the American Kennel Club since 1904 and this small, but mighty pup is a popular breed of dog in the United States. The Miniature Pinscher originated in Germany in the 1600s and their name (Pinscher) means terrier in German. They are not related to Doberman Pinschers and were used for hunting rats and mice. The Miniature Pinscher is a mix of the German Pinscher, Dachshund, and the Italian Greyhound. In the 1800s, the breed became unattractive and deformed due to the breeders trying to make them smaller, but this was fixed in the early 1900s. The breed became popular in German dog shows and after World War I they became popular in the United States. The Miniature Pinscher was officially recognized by the American Kennel Club in 1925. The Chipin is an adorable mix of the parent breeds.

Dear admin,
Just got my chipin last week. They’re the best! I too will be gone to work. Loved her at the spca when she gave little kisses and was bright and so energetic. She sleeps a lot at home but I do walk her. What else do I feed her? She likes dried dog food and the spca says give her boiled chicken.

The other great thing about the Chipin is you’ll love having one in your home because it will immediately become a big part of the family. These dogs absolutely fall head over heels in love with kids and they’re even really friendly with other dogs and enjoy playing with them. So you can have your Chipin interact with other dogs without any problem because they’re friendly, outgoing, and like to be around other canines as well. And since it’s a small dog, it’s a great pup to own whether you live in a house or an apartment because they don’t take up too much space and they don’t need a great deal of space either.

These intelligent breeds are not difficult to train, requiring a firm and patient trainer who would carefully handle him. It is essential to impart socialization and obedience training to the Chipin puppies so that they may develop a pleasing personality. They are also to be groomed well enough so that they can keep their protective and territorial nature under control. Proper behavioral training may help them put a check on their uncontrolled barking, especially when excited.

Another fun fact about Chipins is that they are intelligent dogs. They learn quickly. This makes them easy to train. You can housebreak most Chipins fairly easily. They also love to learn entertaining tricks. They’re a wonderful breed that will bring you lots of enjoyment through the years.

Chipins as a Pack Animal

The Chipin dog (a. k. a the Pinhuahua or Minchi) is an upbeat, compact cutie with smarts and looks to kill– the full package.

Due to their alert nature and extreme protectiveness of their humans, these little dogs can be trained to make excellent watchdogs. As long as they know who’s boss, they are easy to train. They even make great travel companions due to their small size and curious nature. With so much energy bound up in this dog, you can take your Chipin pup on any adventure and make a fearless duo.