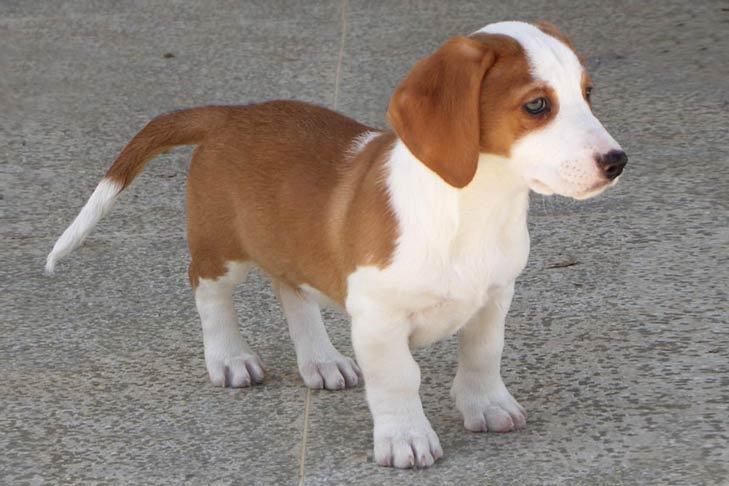 The Drever dog is not hypoallergenic. The price of the Drever dog is about $300 to $600. It is used for the tracking and hunting deer and also for other games. This dog is rarely available outside Sweden.

Swedish hunters did not initially have a specific name for their crossbred Dachsbrackes, and simply referred to them as Dachsbrackes.   As the decades wore on and it became increasingly clear that their Dachsbrackes were different from those of Germany, they began to call them Swedish Dachsbrackes or Svensk Dachsbrackes.   By the 1940’s, the Swedish Dachsbracke had established itself as the most popular working scenthound in Sweden, and the breed was divided into two distinct sizes.   The Swedish Kennel Club became very interested in granting official recognition to this uniquely Swedish breed.   However, the club wanted to select a name for the breed that would distinguish it as much as possible from the German Dachsbracke breeds.   The club also wanted to distance the breed from Germany because such associations were considered highly negative in the years immediately following World War II and the Holocaust.   A nationwide newspaper contest was held in 1947 to give the larger of the two Dachsbracke sizes a new name.   The name Drever was selected as the winner.   The Swedish word Drev describes a specific style of hunting where the dog drives the prey towards the hunter, and the word Drever literally means, “one who ‘drevs. ’”  In 1949, the Swedish Kennel Club granted full recognition to the Drever, becoming the first major canine organization to do so.   Shortly thereafter, the Federation Cynologique Internationale (F. C. I. ) also granted recognition to the Drever as a member of the Scenthounds and Related Breeds Group.

Drever dogs are medium active and they will need a proper amount of daily activities to be happy. Playing with his owner in the house, chasing the ball, or just long walks can all do the trick and keep this dog satisfied. If you provide him with enough daily activities you don’t have to worry that your dog will miss behave.

Additionally, you will need to keep your Drevers nails trimmed to prevent them from getting too long and causing the dog pain as he walks. It will also be important to keep your pets ears cleans and make sure too much wax doesn’t build up and lead to an infection. Also be sure to brush your Drevers teeth a few times each week.

The Drever is a low-maintenance breed.   These dogs should never require professional grooming, only a regular and thorough brushing.   Drevers do shed, and they can shed a whole lot.   Many Drevers shed more than breeds several times their size, and they can cover carpets, furniture, and clothes with hair.   Although regular brushing can greatly reduce shedding, it cannot eliminate it entirely.   Drever owners do have to regularly clean their dogs’ ears.   The drooping ears of the Drever can collect dirt, grime, food, water, and other particles which can then become lodged in the ear.   Such lodged particles can lead to irritations, infections, and even hearing loss if not regularly and carefully removed.

Maintaining your Drever’s short, coarse coat won’t be a hassle, and you can call him a low maintenance dog. All that is essentially required is for you to give his coat a good brush twice a week. Nails will also need to be checked as well as his ears. Ignoring his ears can lead to wax build up and dirt and this can result in infection.