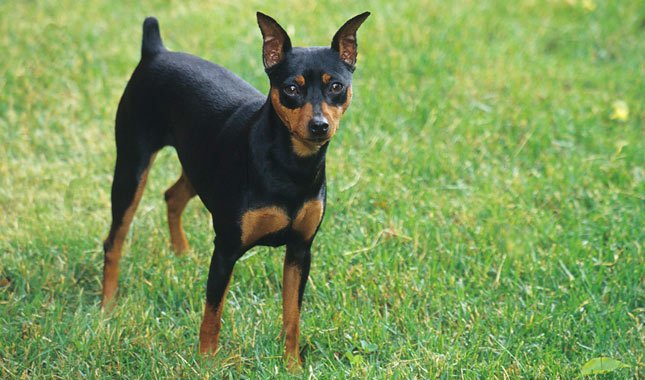 The Miniature Pinscher is one of the oldest and most common members of the Pinscher/Schnauzer family.   This family also indisputably includes the Doberman Pinscher, the German Pinscher, the Austrian Pinscher, the Miniature Schnauzer, the Standard Schnauzer, the Giant Schnauzer, and the Affenpinscher.   Most experts believe that the Danish/Swedish Farm Dog is also a family member, and some place the Dachshund, Swiss Mountain Dog breeds, and the now-extinct Belgische Rekel in as well, although those additions are more controversial.   The origins of the Pinscher/ Schnauzer family have been lost in time.   However, these breeds have served as the farm dogs of German-speaking peoples for many centuries, and perhaps millennia.   The primary purpose of these dogs was to kill rats and other vermin, although some were used as guard dogs and cattle drovers as well.

Miniature Pinschers are highly intelligent dogs and eager to please, though they can be known to exhibit some stubborn behaviors. If they learn they can push you around, they certainly will. An improperly trained Miniature Pinscher will rule the roost, no doubt about it. These dogs do make excellent watch dogs despite their puny size, though this can be challenging for some. Their big-dog bark can be especially problematic in tight quarters or in apartments where walls are thin.

The Miniature Pinscher is a fiery breed with a personality that far outsizes its small body. The Miniature Pinscher temperament is extremely energetic, athletic and an inquisitive breed. They have a playful and bold demeanor that would seem to belong to a much larger dog. The Miniature Pinscher can be affectionate with family if they sit still long enough to do so. That being said, these are decidedly not a lap dog. Miniature Pinschers need to be kept busy to be content. If they are exercised regularly and thoroughly, the Min Pin can be a well-adjusted and happy apartment dog. A Miniature Pinscher should also be socialized from a young age, as they can be aggressive with other animals and humans if they are not.

These little dogs love to dig. Provide an area or digging box for them so they can dig to their heart’s content. You can get a sandbox and fill it with sand and hide their toys or a bone in it for them to find. Just be aware that if the weather is warm the sand may get hot. You can wet it down with the hose if it is. For more ideas on how to provide for your Miniature Pinschers digging instinct read “Dog toys for diggers“.

The Miniature Pinscher is not just called the “King of Toys” for their regal look. This pint-sized breed has a strong pack-leader mentality, and novice dog owners may find themselves being ruled by a small, playful monarch. Early and frequent training and socialization will help train your pup to respond to your leadership. They are a family-oriented dog that loves children. However, as a small dog, spending unsupervised time with young children may not be wise. Always guard your children and your dog from accidents with proper supervision. Though this breed is very affectionate with their family, the Miniature Pinscher is shy around strangers and not overly friendly with other dogs and or cats. If you intend on keeping other dogs, you must socialize your pup at an early age to prevent any negative behavior towards other pets. With high energy levels and a spirited countenance, they need a lot of exercise and a chance to run around. Training your Min Pin can be frustrating because they only respond moderately well. With time, consistency, and patience, this breed can be a loyal, fun companion for the family.

Miniature Pinschers as a Pack Animal

The Miniature Pinscher is not to be confused with the large Doberman Pinscher breed, although the Min Pin looks like a shrunken replica. The Doberman is a younger breed than this one. Unfortunately, the Min Pin’s ancestry is under debate. Most people can agree this breed is very old, dating to possibly 2,000 years ago, but detailed accounts of this breed were only kept starting in the 19th century. Most believe they hail from the German Pinscher family, Pinscher being the German term for used for biter or terrier. Some people have also suggested the Italian Greyhound and the Dachshund influenced breed development. The red coat variety of the dog was nicknamed the Reh Pinscher for their similarity to small red deer living in Germany at the time. By the late 1800s, development of the canine was underway and the Pinscher Klub was formed in Germany; the association was later renamed the Pinscher-Schnauzer Klub. By 1900, the Min Pin was being shown at the Stuttgart Dog Show in Germany. Only a short 19 years later, they arrived in the United States where they gained popularity. By 1929, the Miniature Pinscher Club of America was formed and the breed was recognized by the American Kennel Club the same year. Originally, this breed was used to help control the rat populations just like a Manchester Terrier, but now the Min Pin is considered a wonderful companion dog. Today, this small package breed with their regal look and stout heart has earned the nickname “King of Toys”.

Full of bounding energy for a dog their size, the Miniature Pinscher needs a great deal of exercise. A small to medium-sized backyard is the best place for this breed as they love to explore and run. Known to be talented escape artists, it’s essential that any outdoor area be secure. Miniature Pinschers will dig under fences if given the opportunity.