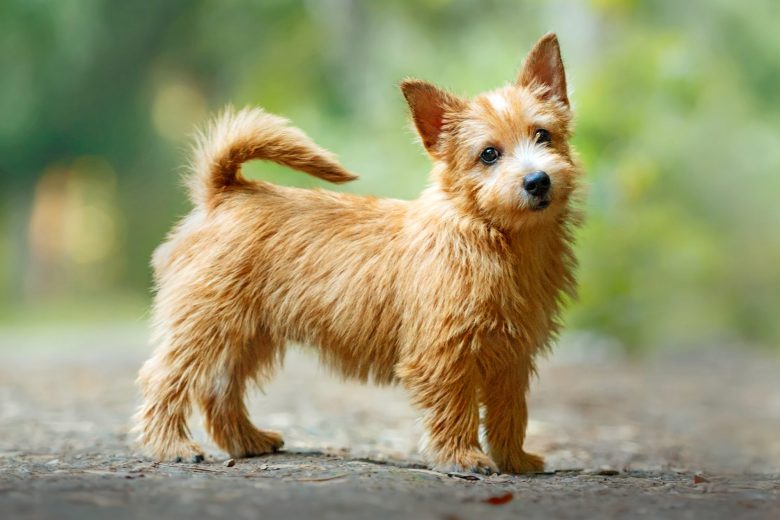 Norwich Terriers can be stubborn and difficult to house-train. The breed also tends to develop small dog syndrome when not properly trained, which can lead to jealousy and guarding behaviors.

The Norwich Terrier has a life expectancy of 12 to 15 years. Origin
During the 1880s, small ratting terriers were quite popular with students at Cambridge University. One strain in particular was very sought after and was believed to have been developed using Yorkshire and Irish Terrier stock. From this strain, a dog named “Rags” was produced. Rags was eventually moved to a stable near the town of Norwich where he became known as a skilled ratter. Rags was also a popular sire. Over the course of two decades, he and his offspring were bred with other game terriers with the ultimate goal of creating a small but bold terrier breed. Rags is considered to be the foundation sire of what would eventually become known as the Norwich Terrier.

Activity Level
The Norwich Terrier was bred to hunt and remains an athletic and agile breed. The Norwich Terrier has lots of energetic and relishes their play time. They should have a long daily walk in addition to regular time outside in a secure area to run and romp.

Norwich Terriers are the smallest of all the Terriers. They make up for their lack of size with personality and a zest for life. They are a bold and tenacious breed, all typical for Terriers. This being said, they do love being around people and are good with children and other pets if raised with them. They are feisty, extremely affectionate and loyal towards their families and rarely aggressive towards strangers. They will however be wary of newcomers at first. They will bark when someone is at the door and make good little watchdogs. They have a high prey drive and cannot be trusted with any small, furry animal. They were bred for work and will need something to do to keep them mentally stimulated.

The Norwich Terrier and Norfolk Terrier are difficult to tell apart and are often confused with one another. The only distinguishing feature that separates the two is the ears: The Norwich has upright ears, while the Norfolk has dropped ears. The two breeds share a similar heritage and background, being developed in the Eastern parts of Britain, and were long recognized as one breed. It wasn’t until the mid-1960s in England that they were recognized as two separate breeds, and the AKC followed suit about a decade later.

The Norwich terrier is one of the healthy breeds of working terrier dogs, that love being in their owner's homes as well as outdoors.

Their reaction to strangers may be friendly, but is more often a bit reserved. Because of this, Norwich Terriers do need more socialization than some other terriers, so their natural caution doesn’t become exaggerated. These alert dogs make excellent watchdogs, but are not aggressive.

The Norwich Terrier is an active dog that needs plenty of exercise. Even though most are now kept as companion pets, they still retain their hunting instincts so they should not be allowed to run off their leash when not fenced in. While they can be trained to socialize with other house pets such as other dogs and cats, they should not be trusted with other animals that may be seen as prey such as hamsters, rabbits, and ferrets. They do tend to bark at anything that makes them nervous or suspicious, if they are just bored, or if they have not had enough exercise to get rid of that excess energy. These dogs can be hard to housetrain but if you stick to a schedule and reward them for good behavior, it can be done. They do like to dig and it is easier to give them a proper place to dig than to try to stop them from digging. However, they are wonderful and loyal pets who are always ready to play.

The Norwich Terrier is an intelligent working dog. He’s happiest when he has a job to do. Training can be fairly easy with this breed as long you provide clear and consistent rules and training. Making a training session interesting rather than repetitive is another way to keep the Norwich Terrier engaged and interested in learning.

Norwich Terriers as a Pack Animal

The Norwich Terrier originated in England sometime around or before the late 19th century. Originally, the Norwich Terrier was bred to control vermin and to hunt fox in packs, which is why they tend to be less independent that other terriers. During the late 1800’s, the small dogs were popular companion animals and dorm room ratters amongst Cambridge University students. The terriers were originally called “Trumpington Terriers”, as the students acquired the dogs from a livery stable on Trumpington Street. Their name comes from the town of Norwich, where a particular Trumpington Terrier named Rags found his way before siring the earliest Norwich Terriers. The Norwich Terrier can be distinguished from its close cousin, the Norfolk Terrier, from their ears; Norwichs’ ears are pricked and Norfolks’ ears flop over (to remember- witches’ hats are pointed, and Norwichs’ ears are pointed).

These dogs have a tendency to overeat and should not be freely fed. Any table scraps should also be avoided to avoid your Norwich Terrier from getting overweight. Grains are also not ideal for these dogs or any dogs, for that matter. Wheat, corn, and soy are often used as filler ingredients in commercial dog foods, and your dog’s body doesn’t respond well to the daily intake of grains. Not only are they not nutritionally beneficial to your dog, but they can also quickly lead to weight gain.