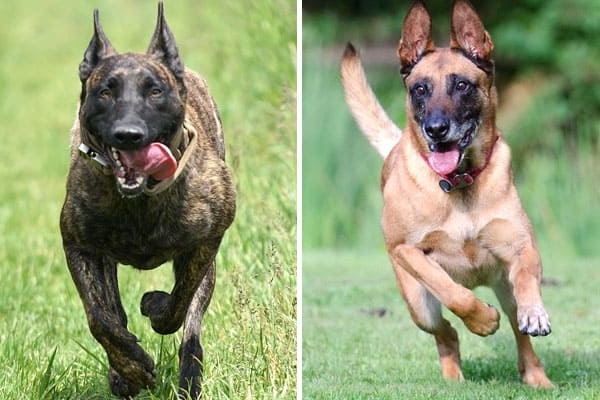 Despite the fact that the Belgian Malinois and the Dutch shepherd look strikingly similar to one another, there are some significant differences between them. Because it is closely related to other Belgian sheepdog breeds, the Belgian Malinois and Belgian Tervuren, as well as the official Belgian sheepdog, are both recognized by the same breed standards outside of the United States. The Dutch shepherd is distinguished from the Belgian sheepdog breeds by the color of its coat, which is distinctively red. Both breeds perform admirably as working dogs as well as in canine competition.

What is a Belgian Malinois?

The Belgian Malinois is similar to the German Shepherd in many ways, but she is a distinct breed all her own! If the following characteristics appeal to you, she could be your best four-legged friend:

What is a Dutch Shepherd?

Due to its selective breeding for herding sheep and cows during the day and guarding the family at night, the Dutch shepherd is a very active dog who is capable of running around all day. They are on the lookout, intelligent, and devoted. For those who enjoy being outdoors, a Dutch shepard is the perfect companion for those who enjoy staying active. The Dutch shepherd is a relatively quiet dog when compared to other breeds, and they do not bark very often compared to other breeds.

Where do Belgian Malinoises come from?

A herding and working dog, the Belgian Shepherd Dog Malinois originated in Malines, Belgium, during the Middle Ages as a herding and working companion. Its direct ancestors were thought to be local shepherd dogs, which would explain its name. Sometimes, rather than being recognized as an independent breed, the breed is referred to as a variety of the Belgian Shepherd. The Belgian Malinois is the breed name used in the United States to refer to this particular dog. Belgian Malinois imported from other countries are typically from Belgium, France, or Switzerland. Veterinary Professor Adolphe Reul of the Belgian School of Veterinary Sciences played a pivotal role in the establishment of an official breed standard. The Malinois was brought into the United States during two distinct periods of time in history. The first time this happened was in 1911, and the second time it happened was between 1963 and 1965. It was during the second period that the Malinois population grew at a significant rate. Belgium Malinois was the name given to the breed when it was first recognized by the American Kennel Club in 1959 under the name Belgian Malinois.

Where do Dutch Shepherds come from?

The Dutch Shepherd, which originated in Holland, was originally bred to herd sheep. On January 1, 1995, the United Kennel Club officially recognized the Dutch Shepherd as a breed.

With females weighing up to 65 pounds and males weighing up to 80 pounds, the Belgian Malinois has a square appearance, which is due to the fact that the breed’s height and length are typically equal or very close to one another. These dogs have muscular front legs and hindquarters, as well as straight, athletic hind legs and athletic hindquarters. In this strong and capable dog, the head is held upright, and the ears are held erect and triangular in shape. The mouth has powerful jaws, and the teeth meet in a level, scissors bite, which gives it its name. Tail: The tail of this athletic dog is long and curled upward, and it is typically carried horizontally or down. A deep mahogany brown or a lighter tan color with black tips covers their short haired coat, which is usually longer around the dog’s neck and rear. Their coat is usually longer around the dog’s neck and rear.

A Dutch Shepherd will typically weigh between 50 and 70 pounds, regardless of whether they are male or female. Their height will most likely range between 22 and 25 inches in height.

A lot of people are confused about whether Belgian Malinois and Dutch Shepherds are the same breed because their sizes and appearances are so similar.

Size, weight, and coat color are all important considerations when it comes to a dog’s physical appearance: they are the three most important factors to consider.

The Belgian Malinois, which originated in the Belgian town of Malines as stock herders, is now used in security, policing, contraband detection, and assistance, as well as participating in herding trials. Due to its medium size and short hair, this medium-sized, short-haired breed has been described as appearing square due to its nearly equal height and length. Although the breed has developed into a protective personality, their origins as a hardworking sheepdog are still evident in their high energy levels and protective nature. Those who enjoy being active outdoors and who spend time running, biking, or hiking on a daily basis will find this breed to be an excellent match for them. It is important to allow the Belgian Malinois to spend time with their family while also providing them with access to an outdoor area where they can run around and burn off some energy. They are intelligent, driven, and quick to learn, and they respond well to socialization and training when given the opportunity early in their lives. Individual temperaments will vary from dog to dog, and they will range from aloof to outgoing in their behavior.

The temperament of the Dutch Shepherd Dog makes them an excellent companion for a wide range of households: these dogs are renowned for their intelligence, obedience, and fun/engaging demeanor, among other qualities. However, for inexperienced owners, they can be a real handful.

When it comes to training and exercise requirements, are Belgian Malinois and Dutch Shepherds the same? YES! The high energy level of these breeds may not be the best choice for you if you do not have the time or the desire to keep up with them.

Because Belgian Malinois are active dogs with high energy levels, it is important to exercise them on a daily basis by engaging in activities such as running, biking, or fetching. In addition, feed your Belgian Malinois a high-quality, nutritious dog food that contains 25-30 percent protein per serving. Ensure that your dog’s fur is brushed on a regular basis in order to keep it clean and free of matting. In addition, you should take it to the veterinarian once a year for routine vaccinations and protection against fleas, ticks, and heartworms, among other things.

Dutch Shepherd is a breed of dog. Holland is the country of origin. Medium in size. Hollandse, Holland Shepherd, and Herdershond are some of the other names for this breed. Males: Height ranges from 27 to 62 centimeters. Weight: 28 kilograms Females: Height: 22-24 centimeters Weight: 23 kilograms Requirements for the exercise: Care that is both active and vigorous Requirements: Low 12-14 years is the average lifespan of this species. Suitable for: family companion, police dog, guard/watch dog, and companion for people who require medical assistance

The Belgian Malinois, which has a short, straight coat, sheds on a regular basis, with at least two periods of heavier shedding throughout the calendar year. It is beneficial to brush this breed’s dogs on a weekly basis in order to remove dead hair and distribute skin oils throughout the body. Brushing your hair more frequently will help to keep loose hair off of your floor, furniture, and clothing, among other things. In order to avoid removing the waterproof properties of the coat, your dog should only be bathed when absolutely necessary unless he has been particularly adventurous and enthusiastic about rolling in an undesirable area. Other essential care includes trimming the nails as needed (typically every few weeks) and brushing the teeth on a regular basis to maintain overall good dental health and fresh breath. In order to prevent the development of infections in your dog’s ears, it is important to keep them clean and dry. The Belgian Malinois is a very energetic dog, and having a fenced-in yard allows the dog to run around and burn off some energy. Exercise on a daily basis, whether through yard play or long walks, runs, or hikes, is essential for the physical and emotional well-being of this energetic, inquisitive dog.

Dutch Shepherds are known as Dutch Shedders – or at least that is what they are referred to as – because they shed all year long and at different times of the year. When there is more hair in the air during the autumn and spring seasons, a vacuum cleaner and de-lint brush will be extremely useful. Although some short-haired dogs shed less than others, this does not imply that the amount of hair shed is less. Dutch Shepherds should have their hair brushed at least twice a week, if not more, depending on the time of year and the weather conditions.

Regardless of whether you have a show dog or a companion dog, the same fundamental care must be provided in terms of nutrition, socialization, and hygiene. The difference is in the grooming, maintenance, and conditioning required for the competition ring. When you first begin your journey into the wonderful world of show dogs, it is always beneficial if your breeder is willing to assist you in becoming a mentor and guiding you in the right direction. Starting with a national breed club, such as the American Belgian Malinois Club, which can be found at www. malinoisclub. com, is an excellent place to begin.

To be a happy, well-adjusted companion, Dutch Shepherds require a great deal of physical and mental activity. Provide him with plenty of opportunities to play, run, and carry out a specific job function. Because he is a herding breed, it is not recommended that he be allowed to run free when outside his yard. He does require regular grooming, though the long-haired and wire-haired varieties will require much more intensive grooming than the short-haired varieties. He also requires regular brushing. It will be necessary to use a steel comb and a natural bristle brush to remove any dead and loose hairs from both the short and long hair varieties. The wire-haired variety will require his coat to be plucked twice a year, at the most. In the event that you are unsure how to pluck his coat, you can bring him to a groomer who is familiar with the procedure. If you have a wire-haired Dutch Shepherd, you should never brush him.

Before you proceed any further, you should be aware that Belgian Malinois puppies do not come with the typical adoption price tag that you might expect.

It is possible for the price of a Dutch shepherd puppy to vary significantly depending on the breeder. Dutch shepherd puppies, on the other hand, are typically available for purchase from a reputable breeder for between $1,200 and $2,500 per puppy. That price tag reflects the amount of time and money the breeder has invested in the puppy’s whelping (birthing), daily care, and medical care during his or her lifetime. If money is an issue, you might be able to find a Dutch shepherd mix for less money. The Dutch German shepherd is a popular breed of dog. An alternative, more cost-effective option is to adopt a dog from a rescue organization, which can be beneficial for both you and the Dutchie who is in need of a loving home.