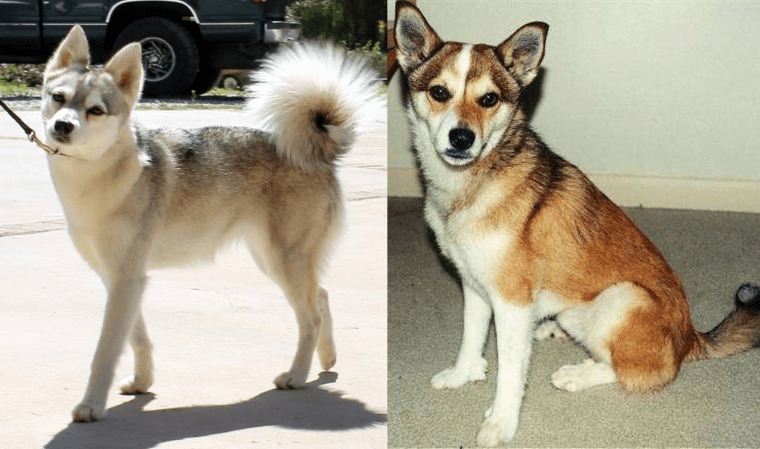 What is a Alaskan Klee Kai?

The Alaskan klee kai is a new spitz-type dog breed from Alaska. Nonworking spitz dogs include the Pomeranian and this breed, which is also known as a miniature Siberian husky. The Alaskan klee kai requires a lot of exercise and will dig holes in the yard if bored.

What is a Norwegian Lundehund?

The Norwegian Lundehund is a small Spitz that originated in Norway. It has a rectangular body and is very agile. It has a wedge-shaped head, erect ears, deep set eyes, strong legs, an elastic neck, and, most importantly, six toes on both feet, allowing it to move around freely. It gets its name from its ability to hunt puffins; the words Lunde and hund, respectively, mean puffin and dog in Norwegian.

Where do Alaskan Klee Kais come from?

The Alaskan Klee Kai was born out of the blue. A smaller dog was bred with an Alaskan Husky in Oklahoma. On a smaller scale than their parent, the puppies from the resulting litter resembled their Alaskan Husky parent. An Alaskan named Linda Spurlin was visiting family in Oklahoma when she fell in love with one of the puppies. They returned to Alaska with Curious the puppy, and Linda set about recreating the breeding, which was difficult because no one knew what the smaller breed was. Spurlin’s brother-in-law owned the Alaskan Husky that was used to make Curious in Oklahoma. He also began attempting to recreate the breeding, with varying degrees of success. Spurlin and her brother-in-law were both able to track down Curious’s and his littermates’ backgrounds, but the brother-in-law eventually lost interest and sold his established breeding kennel to Spurlin. Each litter was carefully assessed, and those that did not meet the requirements were spayed or neutered and placed in loving homes. After she began breeding entire litters that exemplified the ideal traits she was looking for, Spurlin drafted a breed standard. This standard is very important when a new breed is being developed to ensure that the breed’s appearance and temperament are properly cultivated. The Alaskan Klee Kai standard is based on three major factors. Once the Alaskan Klee Kai breed had been refined, Spurlin began offering it to the public on very strict contracts. Any dog with unfavorable characteristics, health problems, or personality defects had to be spayed or neutered. Alaskan Klee Kai breeders were expected to follow strict breeding guidelines. Eileen Gregory took over Spurlin’s breeding business. Gregory was a pivotal figure in the formation of the American Alaskan Klee Kai Association.

Where do Norwegian Lundehunds come from?

The Lundehund is a fascinating and rare breed from Norway. In their native Norway, they were once used to hunt puffin birds, and their dexterity and flexible joints made them ideal for the job. They have extra toes, a flexible neck, and adjustable ears, among other characteristics that make them ideal for their job.

The standard Alaskan Klee Kai is the largest of the three sizes of miniature huskies. They range in age from 15 to 17 years old. The height is 5”. The UKC slightly revised our breed standard last year, making the standard size 15-17” tall. Alaskan Klee kai (over 17” and up to 17”) Despite the fact that being 5” tall is seen as a flaw in the breed, it is still considered a standard klee kai. Their height is measured from the top of their shoulders to the ground. According to my research, a standard size klee kai will weigh 17-22 lbs when they reach full maturity at 2 years old. The average weight of a standard size Klee Kai, according to my research, was 19. 5 lb. weight I should also mention that male Alaskan Klee Kai aren’t always bigger than females. According to the American Kennel Club, a Shiba Inu weighs 17-23 pounds and an Alaskan Malamute weighs 75-85 pounds.

The Klee Kai resembles a small Siberian Husky in appearance. He had almond-shaped eyes, a wedge-shaped head, prickly ears, a strong body with a back-curling tail, and prickly ears. In the spring and autumn, he sheds a lot due to his thick coat. Contrasting hair colors create a striking masked face, which is complemented by the variety of colors or color combinations in the eyes. The appearance of the Alaskan Klee Kai reflects the breed’s northern origins.

The Norwegian Lundehund is a small, agile Spitz breed with unique characteristics found nowhere else. The dog’s first task was to wrestle and retrieve live puffin birds from the crevices of steep vertical cliffs on remote Norwegian islands. To enable the dog to climb, descend, and brake on these cliffs, unique structural characteristics have evolved, and they must be present as they define this breed. This shoulder structure produces an unusual rotary movement. Finally, the ears close and fold forward or backward to protect against debris. When it comes to strangers, the temperament is alert but not outgoing.

This rambunctious puppy needs to be entertained all of the time. Food-dispensing toys, rather than food bowls, benefit Alaskan Klee Kai even the most active owners. These dogs, like many other active breeds, are prone to “contrafreeloading,” where they actually prefer to play games to earn their meals rather than simply eating them! Alaskan Klee Kais can easily become destructive or vocal when they are bored, which makes it critical to keep both their physical and mental health in check.

The energy level of the Norwegian Lundehund is medium to high, and he is happiest when he can get some form of physical activity on a daily basis. The Lundehund is a natural at agility and flyball, and most of them excel at other dog sports as well, thanks to his ability to turn on a dime. Long walks or other forms of active play will suffice to meet his physical activity needs. Every day, give him at least two 30-minute walks, one-on-one playtimes, or other activities. At home, a well-behaved Lundehund is less likely to cause mischief.

The Alaskan Klee Kai is not a hypoallergenic dog breed. His double coat is thick and he sheds frequently. He’s also a seasonal shedder, shedding heavily twice a year. He sheds a lot of hair for such a small dog when he’s shedding heavily. His grooming needs are typically minimal; brush him thoroughly once a week with a comb, slicker brush, and pin brush to remove any loose hairs. He’ll need to be brushed every day if he’s shedding a lot, and warm baths will help loosen the coat and speed up the shedding process. Do not over-bathe your Alaskan Klee Kai; he does not have a strong doggy odor and should only be bathed twice a year or when he comes into contact with mud or other potentially harmful substances. His toenails may naturally wear down due to his active lifestyle; however, check them every two weeks to ensure they do not require a quick trim. Have his teeth professionally cleaned once a year to maintain good oral hygiene.

The Alaskan Klee Kai will “groom” itself by rubbing its coat against solid objects to speed up the shedding process.

The Norwegian Lundehund’s undercoat is dense and sheds heavily twice a year. In addition to the heavy seasonal shedding, he sheds small amounts every day. Brush him once a week to remove loose hair, redistribute oils on the skin for a healthy coat and skin, and keep him clean. Brush him more frequently to get rid of the loose hairs if you don’t like the shedding. It’s best to brush him every day in the spring and fall to keep the shedding under control. He’ll need his nails trimmed on a regular basis, usually every 2 to 3 weeks. Some Norwegian Lundehunds dislike having their nails trimmed. Your veterinarian can trim his nails if necessary. The tufts of hair between his toes can be trimmed to keep him from tracking more dirt and debris into the house. His ears must be cleaned once a week to remove dirt and moisture. The Norwegian Lundehund requires a dental plan to keep his teeth and gums healthy.

The Alaskan Klee kai, on the other hand, is undeniably one of the cleanest dogs on the planet. They don’t have a canine odor or “dog breath,” as some refer to it. The Alaskan Klee kai can groom themselves for hours if they feel the need.

Norwegian Lundehunds are relatively easy to care for when it comes to grooming. Regular brushing and combing with a firm comb or brush is required, with special attention to the undercoat to prevent matting and tangling. Regular brushing will help to reduce the amount of shedding in this breed because it sheds a lot. Dry shampoo is preferred by the majority of owners, and bathing should only be done when absolutely necessary.

Alaskan Klee Kai puppies are quite expensive. You can expect to pay between $1800 and $3000 for a Klee Kai. Depending on the breeder, the price varies. It’s possible that the difference is due to the breeder’s preferences. The Alaskan Klee Kai Association of America is a good place to start looking for a reputable breeder if you’re looking to buy an Alaskan Klee Kai. At all times, request to see a puppy with its mother.