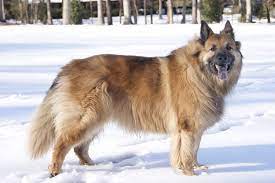 The Chow Shepherd dogs are very active and lively. They are very intelligent dogs who are keen to learn new things. They are very protective of their family and if not properly socialized, may become territorial. They are wary and suspicious of strangers and will bark to alert the family of an unfamiliar guest. These dogs may not be suitable for families with small children unless the dog is socialized from puppyhood. They are obedient dogs who would make excellent watch/guard dogs and great family pets with proper training.

While the idea of having an incredible guard dog in your backyard may be appealing, that doesn’t mean you should rush out and buy the first Chow Shepherd puppy you come across. These dogs can be challenging for novice owners, and ownership may be best-suited for those with more experience.

Personality: The personality of the Chow Shepherd is very alert, fearless, and sometimes aggressive. They are not generally aggressive but if they or their family are been threaten, they will not back off and defend them without any fear.

The Chow Shepherd is high-energy and incredibly intelligent. The combination of the Shepherds ability to perform well in police work and the Chow Chow’s love for human interaction makes a large, hard-working love-bug.

If you have kids, steer clear of the Chow Shepherd. Like the Chow Chow, they can be dominant and territorial, as likely to take kindly to a stranger or a boisterous toddler as they are to a missed meal. They’re not great with small pets, either – cats, hamsters, and guinea pigs are more likely to be seen as annoyances than potential friends, so think twice before introducing a Chow Shepherd pup into a multi-pet or child-friendly household. If you do decide to give it a try, remember that early socialization is the key to future harmony.

In addition to being very intelligent, they are also remarkably independent. German Shepherds are well known to be social dogs when they are trained correctly. They require regular contact with both humans and other dogs. And Chow Chows are a breed that is associated with more of a reserved disposition. In other words, being around people or other dogs regularly is not a hard requirement for the Chow Shepherds because this breed will go with you when they desire your attention.

Chow Shepherds as a Pack Animal

The Chow Shepherd is a loyal and protective companion that needs an experienced and confident handler. It can be temperamental and does not like interacting with people or animals outside of its immediate family. However, with consistent training, it can be a loving and dedicated guardian.

The coat of the Chow Shepherd is usually pretty dense and thick and may feel rough to the touch. They may be solid or multicolored and sometimes have German Shepherd style markings including the muzzle, mask, spots on the body and eyebrow markings.