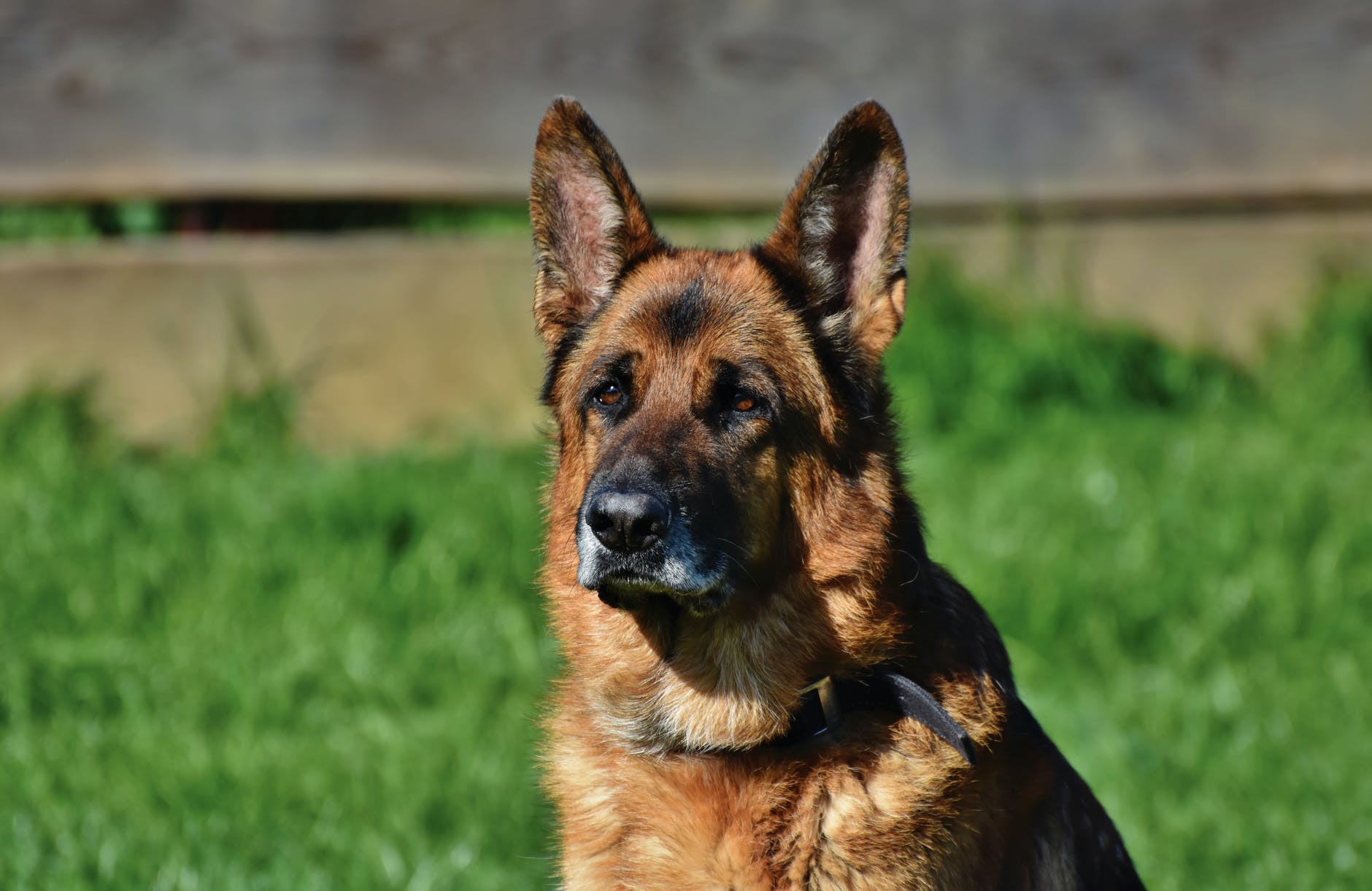 German Shepherd Dogs are versatile, intelligent and energetic dogs, known for their loyalty. They can learn a variety of orders, which makes them ideal for service, military, and aid work. German Shepherds are affectionate dogs that make excellent companions as well as exercise or exploring partners when they are not at work.

German Shepherds are not inherently aggressive, and when you come across one that is, it typically because that dog is living an unhappy lifestyle or his owner hasn’t properly trained him.

If your dog has been aggressive in the past or you suspect she could become aggressive, take time to evaluate the situations that have upset her. Who bore the brunt of her aggression? When and where did it happen? What else was going on at the time? What had just happened or was about to happen to your dog? What seemed to stop her aggression? Learning the answers to these questions can clarify the circumstances that trigger your dog’s aggressive reaction and provide insight into the reasons for her behavior. You need an accurate diagnosis before you can hope to help your dog.

Aggressive behavior problems in dogs can be classified in different ways. A beneficial scheme for understanding why your dog is aggressive is based on the function or purpose of the aggression. If you think of aggression this way, you can determine what motivates your dog to behave aggressively and identify what she hopes to gain from her behavior.

Some dogs will attack and bite an intruder, whether the intruder is friend or foe.

Territorial aggression is something German shepherd dogs have many problems with. Many breeds of dogs were used to protect, but none of them were used as much as the German shepherd. It’s in their nature to protect what’s theirs.

Dogs may show aggressive behavior when they think that one of their family members or friends is in peril.

German Shepherds are genetically herding dogs. This means they were originally bred for a purpose- to herd sheep and other animals and protect livestock on a farm. This breeding results in some pretty strong protective instincts, and lots of loyalty. There’s one thing you can be sure- your German Shepherd has got your back.

Many dogs show the tendency to guard their possessions from others, whether they need to or not.

Sometimes, GSDs can also show possessive aggression or resource guarding, which is triggered when they feel threatened that something valuable to them will be taken away. Often, that involves toys or food, but could also concern people or space.

A fearful dog may become aggressive if cornered or trapped.

A German Shepherd that has received punitive training or subject to physical abuse, verbal abuse, violence, or aggression is more likely to attack an owner out of fear. This will be the same for any breed.

Motivated by fear, defensively aggressive dogs decide that the best defense is a good offense.

Defensive drive is the aggression and fear responses in a dog. Defensive drive contributes to ‘fight or flight’ and self preservation. It’s one of the dog’s strongest instincts yet the drive that confuses people and gets German Shepherds in trouble most

A dog who perceives herself as high in status may show aggression toward family members.

Early social interactions with kids, babies and other animals is also important if you want your German Shepherd to be well-behaved around guests. With the proper education, this easy-to-train pup can be a great family dog.

A dog who’s excited or aroused by something but is held back from approaching it can become aggressive.

The German Shepherd may embody some of the best traits of dogs, but they’re not for everyone. Originally bred to herd flocks all day, this is a high-energy dog who needs a lot of activity and exercise. Without it, they’re likely to express their boredom and frustration in ways you don’t like, such as barking and chewing.

Redirected aggression occurs when a dog is aroused by or displays aggression toward a person or animal, and someone else interferes.

An otherwise gentle, friendly dog can behave aggressively when in pain.

If a German Shepherd has suffered an injury and is in pain, it may lash out at its owner and attack when least expected. You can tell that your dog has an injury if it portrays signs of pain like limping and whining. If you notice such signs, you should take your pet to the vet.

Intact male dogs will still vie for the attention of females in heat, and females will still compete for access to a male.

Both male and female dogs can display aggression as part of their mating behavior. This issue is often limited to intact dogs.

Predatory aggression is the sudden, impulsive action of a dog which can result in a grab bite to the abdomen or the jugular. Signs will include your dog stalking their prey. This is where a dog will clock is target and will move silently and quickly towards the target. This may be the only type of aggression your dog may show. Again, this is a natural behavior for a dog as their ancestors would have needed to hunt down their prey. However, this is defiantly a behavior that needs to be nurtured and trained. If your German Shepherd shows any signs of predatory behavior, even if your uncertain it is best to seek professional advice.

If you’re deciding whether to live with and treat your aggressive dog, there are several factors to consider because you, as the pet parent, are ultimately responsible for your dog’s behavior. These factors involve the level of risk in living with your dog and the likelihood of changing her behavior:

Regardless of other factors, large dogs are more frightening and can inflict more damage than small dogs.

A male German Shepherd can grow up to 24-26 inches whereas Female can Grow up to 20-22 inches. With this size these breeds are hard to handle if they become aggressive.

Young dogs with an aggression problem are believed to be more malleable and easier to treat than older dogs.

Dogs who have already bitten are a known risk and an insurance liability.

Abused dogs become aggressive out of fear. When a dog has a history of being hurt by people, they may distrust all humans.

Dogs who stop their aggression at showing teeth, growling or snapping are significantly safer to live and work with than dogs who bite. Likewise, dogs who have delivered minor bruises, scratches and small punctures are less risky than dogs who have inflicted serious wounds.

The American Animal Hospital Association (AAHA) conducted a study and concluded that German Shepherds were one of the most dangerous breeds based on bite severity and frequency of biting. This is not surprising given the fact that German Shepherds have one of the most powerful bites of all breeds. The study also concluded that large dogs with short, wide heads were the most likely to bite. This conclusion is supported by the fact that Pit bulls and Rottweilers are responsible for the highest number of fatal attacks. German Shepherds are more dangerous than the average breed, but they are not at the top of the list.

Dogs at the highest risk of being euthanized for aggression are those who give little or no warning before they bite and who are inconsistently, unpredictably aggressive. Dogs who give warning before they bite allow people and other animals time to retreat and avoid getting hurt. As counterintuitive as it might seem, it’s easier to live with a dog who always reacts aggressively when, for instance, every time you push him off the bed than a dog who does so only sporadically.

How often your dog is exposed to the targets of her aggression can affect how easy it is to manage and resolve her behavior. A dog who’s aggressive to strangers is relatively easy to control if you live in a rural environment with a securely fenced yard. A dog who’s aggressive to children can be managed if her pet parents are childless and have no friends or relatives with children. A dog who is aggressive to unfamiliar dogs poses little difficulty for pet parents who dislike dog parks and prefer to exercise their dog on isolated hiking trails. In contrast, living with a dog who has recurring ear infections and bites family members when they try to medicate her can be stressful and unpleasant.

Are the circumstances that prompt your dog to behave aggressively easy or impossible to avoid? If your dog only guards her food while she’s eating, the solution is straightforward: Keep away from her while she’s eating. If no one can safely enter the kitchen when your dog’s there because she guards her empty food bowl in the cupboard, that’s another story. If your dog bites any stranger within reach, she’s a lot more dangerous than a dog who bites strangers only if they try to kiss her.

There are many causes of aggressive behavior in German Shepherds. It might be due to a dominance related issue between you and the dog, or it might be a trigger that was never properly dealt with from puppyhood – such as an attack by another dog. Whatever it is that is causing your German Shepherd’s aggression, you need to address it as soon as possible. The results of prolonged aggression can be not only scary, but dangerous if not quickly taken to task.

Ease of motivating your dog

The final consideration is how easy it is to motivate your dog during retraining. The safest and most effective way to treat an aggression problem is to implement behavior modification under the guidance of a qualified professional. Modifying a dog’s behavior involves rewarding her for good behavior—so you’ll likely be more successful if your dog enjoys praise, treats and toys. Dogs who aren’t particularly motivated by the usual rewards can be especially challenging to work with, and the likelihood of such a dog getting better is small.