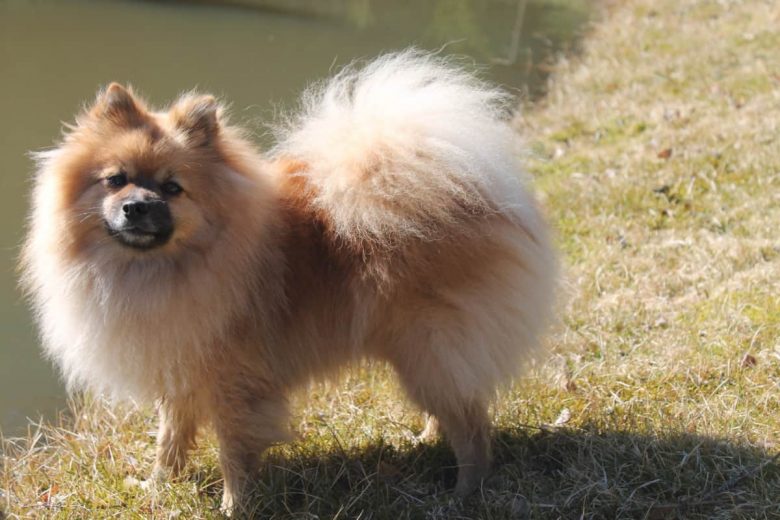 Despite their difference in size, all German Spitz share temperament and behavior traits; they are cheerful, alert, dynamic and very affectionate with their human family. They are wary of strangers and prone to barking, which makes them good guardian dogs, but they are not good protection dogs because of their friendly character.

The Grossspiz particularly is a typical representative of Spitz type dogs. This is an agile and very active dog, who enjoy spending time with his human family. He is an equable companion, who knows how to get your attention. He is bright, resourceful, loyal, and alert. The Giant German Spitz makes an excellent watchdog, who will warn you whenever a stranger comes near your property. But, contrary to the Mittelspitz and Kleinspitz, this one can be a good guard dog too thanks to his size. This is a very happy dog, always ready to play. He likes to do all sorts of crazy things and escapades, like walking on his hind legs, so I’m sure your kids will love this dog. However, Grossspiz won’t tolerate any badgering or molestation, which makes him a bit unpredictable in this case. Also, some dogs, males especially, can be resent with other dogs, so it’s best to socialize them as soon as possible.

If you don’t train your German Spitz from an early age to accept strangers, she may develop stranger anxiety. Even with proper socialization, the best she may be able to do is tolerate them. Without that early training, she can become aggressive.

The German Spitz has a medium-long coat and comes in a variety of colors from black to white. This includes shades of cream, orange, sable, gold, blue or brown. They can also have any of these colors on a white background making them parti-colored or they can be bi-colored in black and tan. Considered small or medium in stature, they are a compact dog with a typical spitz or fox-like head. This perky canine has a tail that curls over the back. If showing in the conformation ring, the coat should be thick and medium long with the hair on the head being short and plush. Ears should be small, triangular and erect on the top of the head. The eyes should be dark and alert, giving this clever dog an inquisitive expression. Their body should be small but sturdy and this spunky pup should never give the appearance of looking fragile or dainty.

The breed develops a strong bond with its people, and although it is an affectionate dog, it does have a tendency to be bossy, and will try to assume the role of pack leader if it senses a lack of confidence or assertiveness from the owner. For this reason, it might not be the best choice for a novice owner. In addition, while it is generally even-tempered, the Kleinspitz may be rather more easily hurt by boisterous children, and will be quick to snap in retaliation. Older, more considerate children will find the dog to be good company, but families with toddlers should steer clear. The thick, double coat needs regular brushing, but is relatively easy to care for, and the breed does not have onerous exercise requirements, meaning the German Spitz is a surprisingly low-maintenance dog. It is also generally healthy, with a life expectancy of 13–15 years.

I adopted my German Spitz when we moved to a new farm and the owner asked me if I wanted him. His wife wasn’t a fan of dogs. Buddy was around 3 or 4 at the time. He was the most loyal, cuddly, friendly, fast, vivacious and at times arrogant friend I’ve ever had. Tougher than a pine knot. He was by my side every step of the way for a little over 13 years. I miss him every minute of every day.

The personality of the German Spitz makes this dog a rather appealing animal to many families. When it is at its best, this dog is incredibly attentive and lively, which is part of the reason that he can become incredibly defensive of his owners. While this dog will likely enjoy the mundane nature of lounging around with a loved one, he also craves physical activity, engaging in playful games with others in the home.

German Spitz are independent and fun-loving. Their ancient status and breeding have led them to be pretty strong-willed and a bit stubborn. Learn about them below.

German Spitzs as a Pack Animal

The Keeshond is a compact, medium-sized dog. He actually looks like some combination of the Standard and Giant German Spitz. He is a bit taller and heavier than the Grossspiz, and as well has a more abundant, softer, and easier to groom coat. This is a dog with physical traits usual for the majority of other Spitzes – the muscular and compact body, wedge-shaped head with the slightly tapering muzzle, well-furred legs, and paws, long and plumed tail curled atop the back, etc. Keeshond has a lush double coat made of long, rough, and black-tipped protective hair, which sticks up from a thick, soft undercoat. Similar to other German Spitzes, male dogs have longer and more lush coats, especially around the neck. The only allowed Wolfspitz colors are wolf-grey and silver-grey. Although this is generally a healthy breed, these dogs can suffer from certain health problems, such as hip dysplasia, luxating patellas or diabetes.

The German Spitz is a small to medium-sized, fluffy companion breed that hails from Germany. “Spitz” breeds, sometimes called Northern breeds, are a type of dog breed frequently found in cold climates. Spitz breeds, including the German Spitz, have thick double coats (a longer outer coat combined with a shorter, thicker undercoat), a wedged-shaped head, upright triangular ears, and a long tail that curls up and over the back.