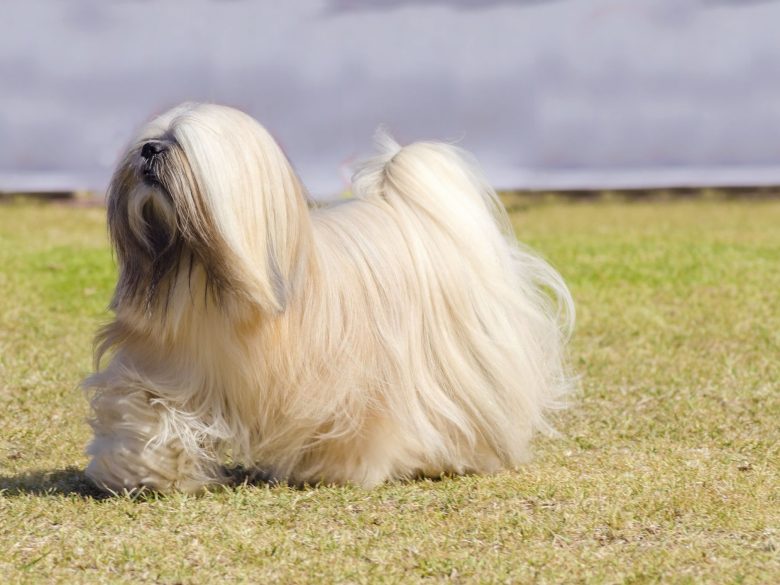 Few breeds come with a more dignified history than the Lhasa Apso. In the misty past of the Himalayas, more than a thousand years ago, Lhasa Apsos were already serving as guard dogs for Buddhist monasteries, alerting the monks with a chorus of barks whenever a stranger appeared. Variously said to be reincarnated monks or descendants of Tibet’s mythical snow lions, Lhasa Apsos were introduced to the West as gifts from the 13th and 14th Dalai Lamas.

It should be remembered at all times that the Lhasa Apso was bred as a guard dog as well as a companion dog. These dogs can be aloof with strangers, although they are affectionate with people who they know and trust. The sharp alarm bark can become a nuisance if the dog is not guided as to when it is appropriate.

Lhasa Apsos have low exercise requirements.   These dogs are quite active in the house, and most breed members will be satisfied with a long daily walk and several shorter potty walks.   The average committed person will be able to meet the exercise needs of a Lhasa Apso without too much trouble.   This breed is also regarded as being among the best-suited for life in apartments.   It is absolutely imperative that the minimal needs of this dog are met, or else behavioral problems will likely result.   Lhasa Apsos are perfectly willing to find outlets for their energy if one is not provided for them, and this breed is likely to become excessively vocal, destructive, hyper excitable, and aggressive if one becomes bored.   Although the Lhasa Apso greatly enjoys long walks and an occasional romp off leash in a secure area, this breed is not a tremendous athlete and those looking for a dog to go on vigorous adventures with them should almost certainly consider a different breed.

Background:Lhasa Apsos originated in the cold mountains of Tibet over 4000 years ago. They are one of the oldest canine breeds, and recent DNA testing shows them to be closely linked with the ancestral wolf. In all likelihood they share ancestry with the Tibetan Spaniel and the Tibetan Terrier. In fact the Lhasa Apso and Tibetan Terrier were once considered to be the same breed. Lhasa Apsos were used by Tibetan Monks to guard the holy temples. They were actually the second line of defense after the Tibetan Mastiffs who watched over the temple entrances. Lhasas were much more than guard dogs. It was believed that, after dying, Dalai Lama’s souls could actually enter the dog for a short period of time. For this reason Lhasa Apsos were never sold and rarely given to outsiders. It wasn’t until 1933 that the 13th Dalai Lama gifted a pair of Lhasa Apsos to his friend Suydam Cutting who was visiting Tibet. It was Cutting who brought the Lhasa back to America and started breeding them. The Lhasa became the first Tibetan breed registered by the American Kennel Club in 1935. Today, there are concerns that the American breed is starting to branch too far out from the original Tibetan Lhasa.

Today’s Lhasa Apso is true to his long and distinguished past of serving as a spirited and highly regarded companion. In his heart, he believes that he is the special one in the household, the one whom others should respect and even defer to. He is friendly and assertive, with a unique ability to distinguish friend from foe and letting those he loves know when he is bothered by someone. Lhasas can be somewhat territorial with other dogs and pets and aren’t always tolerant of children who are too rough around them. Socialization from puppyhood is critical to help a Lhasa learn to get along with everyone. When he does, he is the affectionate and self-possessed ruler of the roost.

Get to know the Lhasa Apso — a friendly, intelligent, confident and comical dog breed.

Lhasa Apsos are terriers in everything but name, particularly when it comes to their inquisitive, confident, and sociable nature. The word terrier doesn’t appear in their name to avoid confusion with Tibetan Terriers.

The Lhasa Apso is an ancient breed that originated in the mountains of Tibet. The Lhasa is named after the sacred city of Lhasa where they were bred in monasteries by Buddhist monks to act as sentinels. Their long, heavy, insulated coat protected the alarm dogs as they patrolled in the harsh environment of Tibet. Recent DNA analysis suggests that the Lhasa Apso is one of the most ancient dog breeds. Lhasas are intelligent, balancing independence with love and devotion. The Lhasa is a joyful and mischievous family companion.

Lhasa Apsos as a Pack Animal

Natural selection probably played the largest role in the early development of the Lhasa Apso’s ancestors.   Those dogs that were ill-adapted to life in Tibet would have died and those that were better adapted would have survived to produce offspring.   It is a commonly held belief that the first dogs in the region were crossed with Tibetan wolves.   The wolves of Tibet have very short legs, thick coats, hunt in groups of two or three rather than in large packs, and often change color and shade during different seasons.   Although very different in appearance, all dogs and all wolves are the same species and can freely interbreed to produce fertile offspring.   Although it is impossible to prove that dogs and Tibetan wolves were crossed either intentionally or accidentally, it is highly likely given breeding practices found elsewhere in the world.   The Tibetan Wolf is superbly adapted to life in Tibet’s challenging environment and crossings it with the domestic dog would likely have made the dog more capable of surviving in its new home.   Such hybrids were also probably very short legged, and this is likely where the trait first entered the bloodlines of the Lhasa Apso ancestors.   An additional trait that came to predominate among Tibetan dogs was a short, wide face.   Although it seems strange, shorter wider faces make it easier to take in more breathable air in oxygen-starved Tibet.   Similar adaptations can be seen in the foxes, bears, wild asses, antelopes, and gazelles of the region.

The Litter size of Lhasa Apsos goes from an average of 4 to 8 puppies. Nevertheless, you can know the exact number of puppies that are coming by visiting a veterinarian and making an x-ray exam. This can only be performed after seven weeks since it is at this time that the bones of the puppies are fully formed. Nevertheless, this is a method that can be harmful to the dog and the litter due to the radiation. It is better to opt for other safer methods such as womb palpitation.