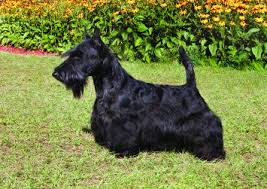 The guarded nature of the Scottish terrier makes it an excellent watchdog, but it also means you’ll have to socialize your dog. Scotties aren’t particularly large or dangerous to other dogs, but when they want to be, a poorly socialized Scottie can be a rather loud alarmist.

For this breed, a fenced yard is ideal. Invisible fences do not deter this dog if he sees a squirrel he must have. Scottish Terrier puppies are active enough, but they continue to be an active breed that enjoys playing outside as they grow older. They are good walking companions and require moderate exercise. You’ll have to keep your Scottie away from the pool if you have one because they can’t swim. They make excellent watchdogs and will warn you if any strangers approach. They’ll also alert you to the presence of a squirrel or a passing bicycle. Because it is moderately active indoors and does not require a yard, the Scottie is an excellent apartment dog. They’ll need to go for a daily walk, and they’ll get a lot of their exercise from indoor play. Scottie puppies and adults alike enjoy lying on the back of the couch and staring out the window, barking at things that catch their attention.

Because Scottish Terriers are difficult to train, they should only be placed with knowledgeable owners. Training is difficult due to its stubborn and independent nature, and it takes a strong and clear leader to get it to listen and obey. Maintaining consistency while avoiding becoming aggressive, impatient, or negative is critical. Yes, keep control, but not to the point where you think smacking the dog will help; this is a sensitive dog who will not respond well to such treatment.

What does the Scottish Terrier’s personality look like? The Scottish Terrier is known as the “Diehard,” which should give you an idea of his personality. He’s independent, feisty, and doesn’t mind standing up for himself. He is always up for a chase or a game. Keep in mind that small animals are his favorite game, so keep an eye on the family hamster. Because the Scottish Terrier remembers harsh treatment, this method will not be effective during training. The Scottish Terrier would benefit from a reward-based system and a gentle voice. The Scottish Terrier, as a working dog with a long history, will require daily exercise. Anything less could lead to a lot of barking. Begin by speaking with a breeder to find a Scottie who shares your personality. The breeder can assist you in finding the perfect match if you find one with experience, which we hope you have. Optimal health It’s caused by a brain defect that makes it difficult for the Scottish Terrier to walk. Scottish Terriers appear to be more susceptible to cancer than other purebred dogs.

This book will teach you everything you need to know about the temperament of the Scottish Terrier, the best animal companions for him, and everything else you need to know to keep your loyal companion happy, healthy, and by your side for as long as possible. You’ll also learn that this breed isn’t particularly friendly with strangers, so having one in your home will give you peace of mind.

The Scottish Terrier is a Scottish Terrier breed that originated in the Highlands of Scotland. Despite references to small, scrappy &ldquo;earth&rdquo; dogs appearing in several of the earliest books on dogs, there are few written records of early breed history. The Scotties were geographically isolated until the late 1870s, when Captain W. F. Scott arrived in the area. W. W. (William W.) Mackie toured the Highlands, buying Scottish Terriers and writing about them. Predators like foxes, badgers, rats, and other vermin competed with local hunters for scarce game. Scotties were bred to go underground and flush out or kill any creature that lived on the ground. The breed was initially contentious, with each proponent convinced that he alone possessed the correct breed type. Even the correct name for the breed was a point of contention. Some of the names given to them were Aberdeen Terriers, Cairn Terriers, and Skye Terriers, but as their popularity grew, &ldquo;Scottish Terrier&rdquo; became the name that stuck. By the turn of the century, Scotties could be found in show rings on both sides of the Atlantic. In the 1930s, Scotties were extremely popular. Fala, President Franklin D. Roosevelt’s dog, was the most well-known dog in the world at the time. Although the majority of Scotties are now kept as pets, the breed’s tenacious nature and instinct to dig and hunt remain.

The Scottie is a lively, proud, and intelligent dog with a dependable temperament. He likes to dig, go for walks, and play ball, and he is a very athletic, home-loving, and affectionate member of his family. Scottish Terrier puppies and adult dogs get along swimmingly with other animals if they are raised with them. Scotties are free-thinking dogs who don’t respond well to obedience training. They have a reputation for being difficult to work with. This is a magnificent dog. If you ask them to do something, they’ll always want to know what’s in it for them. They excel at agility not just as puppies, but as adults as well. This breed requires consistent obedience training. If you don’t establish yourself as the pack leader, your Scottie will take over. Puppies of the Scottish Terrier are more difficult to train than those of other dog breeds. He takes longer to learn new commands than most other breeds. You’ll need to be extra patient when training a Scottish Terrier puppy, but it’ll be worth it in the end to have a gentle, loving, loyal, intelligent, dedicated, protective, and sensitive companion. A dog who will sleep in your bed and sit in front of the television with you.

Scottish Terriers as a Pack Animal

The Scottish Terrier is a short-legged, small dog with a strong build and good bone. He has a long head in comparison to his size. His body is thick-set, cobby, and hung between short, heavy legs, and his coat is hard, wiry, and weather-resistant. These characteristics, as well as his distinct keen, piercing, varminty expression and erect ears and tail, distinguish the breed. The Scottish Terrier’s bold, confident, and dignified appearance epitomizes power in a small package.

It’s important to remember that the Scottish terrier is a poor swimmer who can easily drown. Because of their short legs and disproportionately large heads, they are unbalanced and unfit for aquatic activities. When your Scottie is near pools, ponds, lakes, or other bodies of water, keep a close eye on them.