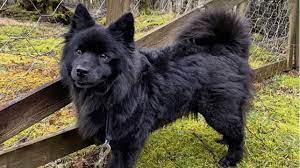 Initially, the Sami people used the Swedish Lapphund as hunting dogs and later on as guarding dogs. All in, this breed was a true working partner. The main trait of this breed is the use of his vocal abilities.

Swedish Lapphund is a multi-talented dog breed which you can use as a hunting dog, guard dog, and reindeer herder as well. It is a rare breed who has earned a very little fame except for its homeland. But the few people who are aware of this breed know that they make a very good family companion.

The Swedish Lapphund still has her herding and guarding instincts. You may be able to train her to bark only when necessary if you start when she’s young. She is suspicious of strangers (but not aggressive) and makes a good watchdog.

Swedish Lapphunds form strong bonds with their families. They make wonderful pets and love activities that involve the whole family.

TEMPERAMENT
The Swedish Lapphund is a basic dog. It is very courageous, extremely endurable and fast, ever watchful and devoted to its owner’s family. It is very friendly and loyal, very intelligent and very easy to train. It makes an ideal family pet and companion and is very fond of children.

Like all spitz dogs in general, the Swedish lapphund demands a stable upbringing and both regular mental and physical stimulation to perform at its best. As a working dog they show their versatility in a number of different fields. Many compete with success in such widely different disciplines as obedience,
dog agility trials, working contest, freestyle/heelwork to music, Rally obedience, and blood
tracking. The Swedish Lapphund can also participate in herding events. Herding instincts and trainability can be measured at noncompetitive herding tests. Lapphunds exhibiting basic herding instincts can be trained to compete in herding trials.

The Swedish Lapphund is an active and intelligent breed, and therefore they need daily exercise to keep them healthy and happy and to prevent them from becoming destructive and noisy.

Swedish Lapphunds as a Pack Animal

The Swedish Lapphund does not require a huge home, however with their vocal nature and agile physical skills, a rural or rural suburbs home would be best. In the busier suburbs or city and more densely packed housing, the Lapphunds vocal nature may prove problematic. With their dense coats, this is a dog that doesn’t enjoy central heating or overly warm homes.

Bred initially as a hunting dog, the Swedish Lapphund lived with the nomadic Sami people in Lapland, where they also herded reindeer and acted as companions and watchdogs. Archaeological remains of dogs of this medium sized spitz type have been found dating back to 7000 years ago, making this type of dog very old indeed and possibly one of the oldest European breeds. Despite their history, the Swedish Lapphund has only been officially recognised as a breed since 1944, when the FCI adopted the first breed standard. Today the Swedish Lapphund is typically a companion dog and show dog, and they are relatively rare in the UK.